We cut a damper adjustment scale in the ash lip.  Lots of people operate their stoves in a narrow range for long periods of time, and this makes it easier to remember your best operating settings.

The andirons have been tricky.  Before we settled on andirons that folded forward, we prototyped andirons that folded over on their sides, moved laterally to both sides of the load door opening, folded in the middle, and/or were removable.  We still like our current version best, in part because it is simple, and in part because one can move the andirons with a poker, or the toe of a boot.  The andiron plate also acts as an air deflector that helps eliminate smoke spillage in installations with marginal draft. 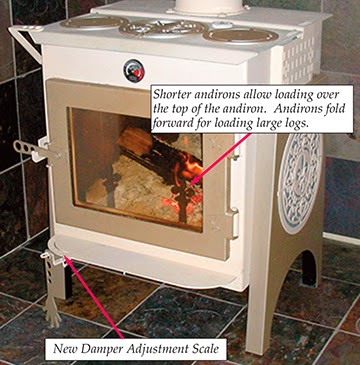