Exciting News!  Our Commander-in-Chief, Tom Morrissey, has been in Quebec, Canada, testing our newest steel hybrid for EPA certification and UL listing.

The first of the EPA testing, the high burn test, went very well (data coming soon).  Another EPA test is on the calendar for tomorrow, and we expect the EPA testing phase to be finished early next week.  Then we move on to UL and clearance testing.

We have been working with the EPA to be the first company to test with cordwood.  Unfortunately, the EPA has not yet approved a cordwood test protocol.   Meanwhile, we are testing with the standard Douglas fir “cribs” which consist of Douglas fir 2x4s and 4x4s, with spacers stapled to them in a precise method described by the EPA (photo below).


We are looking forward to continued successful testing, and getting our newest steel hybrid in production soon.  Stay tuned! 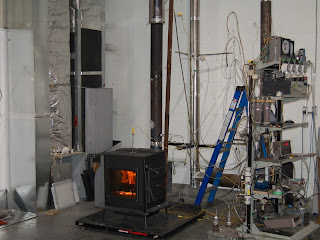